MENU 19.jamky
Přihlásit se
Registrace
Install the app
You are using an out of date browser. It may not display this or other websites correctly.
You should upgrade or use an alternative browser.

You’ve heard about them, maybe seen them, too: everyday products being hyped in your Twitter and Instagram feeds. They’re sometimes endorsed by pros, celebrities and influencers alike. But do they live up to the hype? We take a closer look.

What Are Golfers Talking About?​

Garmin, a company best known to golfers for its GPS devices, has recently jumped into the personal launch monitor category with its Approach R10. The device retails for $599.99 and, while that’s well below professional-grade offerings from Foresight, Trackman and Flightscope, it’s only $100 more than our top pick in the category, the Rapsodo MLM.

Hi, I’m Harry and I test a lot of things at MyGolfSpy. I play professionally when I’m not checking and comparing specs on gloves, rangefinders, bags, ball retrievers, etc. You can call me the Director of Soft Goods Testing here at MGS. You can also just call me Harry. That’s fine, too.

The personal launch monitor category has exploded. The most affordable products cost as little as $200 while the high end of the entry space tops out around $600. That’s where the Garmin Approach R10 lives.

Average golfers are desperate for an accurate, feature-rich option at an affordable price. That’s a nearly impossible ask but as golf’s technology leaders cross category boundaries, golfers hungry for a breakthrough have their wallets ready. Will the Garmin Approach R10 prove to be the one that sets a new standard?

The Approach R10 brings with it an extensive (for the category, anyway) number of metrics and some specific claims about its accuracy. The stated specs are +/- 1-3mph and +/- one to five yards on carry distance relative to Trackman.

The Approach R10’s feature package includes a visually appealing app and add-on features that allow you to play a virtual round of golf on your home course, play against other people and record your swing all at the same time.

The kick in the pants is that some of those add-ons will cost you a bit extra. Nobody rides for free.

Higher price aside, the Garmin offers significantly more data than Rapsodo, though, as you should expect, not nearly as much as Foresight or Trackman.

Year after year, we have talked about the significant opportunities for improvement in the personal launch monitor space. Typically, we compare the personal launch monitors we try to the Foresight GCQuad. That gives the best-in-class baseline for accessing accuracy but no one should expect a $600 model to compete with an $18,000 device. With that in mind, while the Quad is still part of the equation, we’re focusing our comparison largely on the Rapsodo MLM—our top pick for golfers looking to spend around $500.

We’ll be sure to include the Garmin Approach R10 in our next personal launch monitor buyer’s guide but, based on our preliminary tests, here are the key takeaways:

What the Garmin Approach R10 Does Right​

The Approach R10 is infinitely portable, easy to set up and operate indoors or out. The graphics on the virtual courses look a bit like something out of Mario Cart but that’s part of the fun. At an absolute minimum, it’s something.

What I love is that it gives me the opportunity to have a blast kicking my mates’ asses from across the pond. That’s right. The R10 has a Compete option which allows you to challenge your mates anywhere in the world. So as bragging rights go, I’m all for it.

We found the R10 holds up better to the summer sun as well. During testing in 95-plus degree heat, the R10 doesn’t overheat and shut down. We can’t say the same about the Rapsodo MLM.

The Garmin Approach R10 offers more data points and, while the accuracy of some metrics needs to be improved, on paper that means a bit more opportunity to dig deeper into your game and identify areas for improvement. I improved significantly once I understood what the various numbers launch monitors provide mean and the influence they had on my game.

If that’s not enough, the Garmin Approach R10 offers 42,000 courses to play from your home. Throw in weekly tournaments for an upgrade and you have a good bit of kit.

What The Garmin Approach R10 Is Missing​

The R10 offers a lot of outstanding features but I want to know what my clubhead is doing at impact. Yes, it can tell me my club path and face angle, etc., but I take those data points with a grain of salt. Here’s why. The Garmin Approach R10 is a Doppler radar and a small one at that. The radar needs at least 16 feet to provide the best data possible. Even when you do have the correct amount of space, your margins for error are thin. Such is the reality of small radar devices. If you don’t have the correct setup and correct club selected, what you’ll get back amounts to little more than an educated guess.

I completely agree with you.

Here’s the rub. The dirty little detail isn’t that personal launch monitors are sometimes off by a bit. Ball speed and distance numbers are generally reliable on straight-ish shots but when the ball starts curving, numbers don’t always pass the sniff test. What you get are results that are sometimes long, sometimes short. Sometimes faster, sometimes slower. Draws become fades and fades become draws. And all of it happens sometimes. That’s just where the technology is for everyone asking you to spend well less than a grand on a launch monitor—so you need to be good with that.

For $600, the dream is to be able to map my game from the provided data and trust that it will translate to the course. Guessing which measurements are accurate and which aren’t may not be part of the fun you’re signing up for.

Does It Live Up To the Hype?​

I’m going to give this a smedium score on the hype meter.

If you’re expecting to go shot for shot for shot and walk away with precise data, you’re probably going to be disappointed. If you’re good with reasonably solid ball speed and distance metrics and are keen on the simulation and collaborative play features, the Garmin Approach R10 may be the most robust offering in $500 to$600 range. For me, it’s worth the money just to challenge my mates back home.

Here’s the bottom line: Golfers demanding more—more precise launch and spin data and a more robust overall dataset—are going to have to pay more. For golfers looking for basic metrics—more fun than is typical for the category and a still reasonable price point—the Garmin Approach R10 may be plenty good enough. 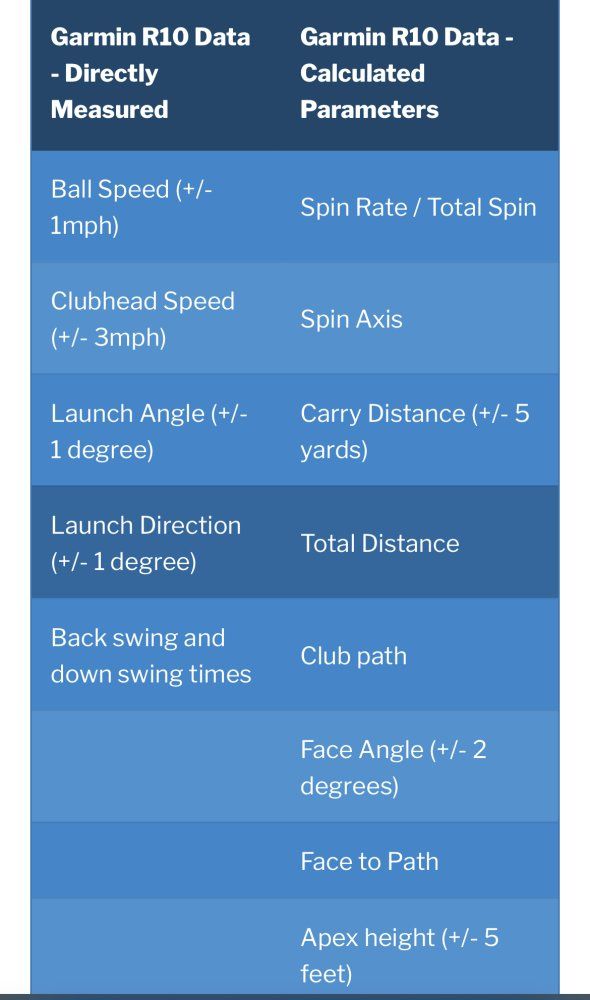 GolfWRX.com 5 things I wish I could tell every good new golfer